That screeching sound is OldPub losing its mind over their paper pulp business burning up like a California wildfire. 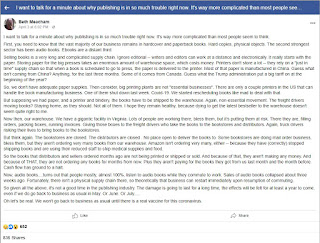 Friend of the Retreat, and my editor, Brian Niemeier also has a post on this development today. He's been talking about OldPub really being in the paper business for quite a while now, and it is obvious that the aforementioned Facebook post is a confession that this is in fact true.

In a related corollary, the audiobook business just crashed; this exposed what many suspected about that market- it's base is people commuting to their bullshit makework fake jobs, which goes alongside a major percentage of users of streaming video and audio services, and OldPub has been as stupid about audio as they have about digital so this news just threw gasoline on the fire.

Daddy Warpig gets into the issue in this Twitter thread here.

Not just comics. TradPub is getting it right in the neck. Full post by a Tor editor below, but TL;DR is "we depend on paper from China to print our books, we be screwed".

But, like comics, this is actually their fault, not the Wuhan Fluhan Death Hack. /2https://t.co/WncMMmQWW2

And he's right. OldPub could have--should have--gone ahead of the curve on publishing technologies and business models years ago but stubbornly thought they could squash them instead and keep everyone on their paper pulp plantation perpetually, using that captive audience to then serve the Death Cult (as they have been) and ensure their own power just as perpetually.

Now it's come undone. Not "coming", "come"; there's no returning from this. All that remains is for the metal fatigue to hit the breaking point and collapse in a cascade that ends in the industry falling into an ashen heap. It couldn't have happened to a more deserving bunch of bastards, and I won't miss any of them once they're gone. It's not like the actually valuable material they published won't find new ways to get published--even in print--once Corona-chan's come and gone.

Meanwhile, I get now how Alucard feels.

Because this is some apocalyptic shit going down, and man a lot of people are finally getting what's coming for them.