Narrative Warfare: Fandom Can't Resist Until It Accepts The Truth

FanTube, I'm talking to YOU. Doomcock, Nerdrotic, Geeks & Gamers, Midnight's Edge, That Star Wars Girl, Heelsvsbabyface- all of you. Listen up.

Your conception of the SJW problem is wrong. You are consistently baffled at how the Woke Brigade go from failure to failure and only fail upward. This reason is because you made the same mistake that others have made for over 30 years in various hobby niches, as explained by author Brian Niemeier below:

The truth is that a cabal of fanatics has been working day and night to infiltrate the entertainment industry and pervert it into a propaganda machine. They've been at it for decades, and now nearly all major studios and publishers bow the knee to the Cult's high priests.

You'd be forgiven for mistaking these screencapped tweets from a self-described game creator for the scribblings on a lunatic asylum inmate's walls. The inability to discern reality from fantasy used to be a symptom of psychosis. Now it gets you a cushy sinecure pretending to make art while gibbering on Twitter.

You couldn't ask for a better example of Death Cult doctrine in practice. The Cult's central tenet is that any limit on personal expression, even reality, is oppressive and must be destroyed. A lot of people assume it's hyperbole to say that the Cult wants to destroy reality, which is odd because the Cultists' own public professions constantly refute that assumption.

That's why claims of the entertainment industry pushing anti-normal person agitprop for profit ring false. The Cultists in charge of our entertainment are laboring under a form of self-induced schizophrenia. They really believe that casting cape flicks with disabled lesbian Eskimo Wiccans will usher in an earthly paradise free of straight, white, Christian men.

Go ahead, read that again after you listen to Doomcock rant about how Doctor Who's recent season was nothing less than wholesale cultural despoiling and defilement.

You made a wholesale category error and it's come back to bite you good and hard in the ass, FanTube.

The Death Cult is not an aberration in an otherwise functional business. It's a Satanic anti-religion that's gained power across ALL institutions--public and private--in the West, and it's very reason for being is to defile and destroy all that gives live meaning and purpose. They revel in taking power over your shows, your comics, your toys, your games and ruining them so thoroughly that you quit them in disgust. They use their power in media and tech to control what you see and hear, following a playbook refined by their predecessors.

my God, man, you’re not supposed to *say* it pic.twitter.com/PRQZQIDBJP

This is why Narrative Warfare is a thing. The SJWs are obsessed with controlling information, and that control not only includes what you receive, but also what you produce, and to do that requires controlling both the flow of information as well as what flows through them. You cannot act on thoughts that you do not have.

Yes, they do use 1984 as an instruction manual. They also use Rules For Radicals, so read that also. The combination results in things like this recent #orcposting flareup; it's a Humiliation Ritual, where they know what they say is bullshit, but by making you go along with it--in any fashion, however slight--they know that they're flexing on you, demonstrating their power, and thereby setting the frame by which all discourse is enacted.

And that's what propaganda controls: The Frame Game.

You buy into their framing of the issue when you accept their terms, however implicit, via attempting logical argumentation- be it Dialetic or Rhetorical. They don't care; they can and will be total bad-faith shitters in order to maintain control over the frame, constantly making you adjust to their shifting of goalposts, knowing that onlookers are inclined to see this as them flexing on you and therefore being in power over you. The result? They win the fight that matters, and you're wondering yet again why Culty Kathy hasn't been guillotined yet.

Until you accept the truth about the problem, you cannot resist it; you can only mire yourself further.

This is why you don't engage SJWs in argument. You shitpost at them, relentlessly and mercileessly. It's about the Frame Game, and only if you control the frame do you have any chance at beating them.

And if you want to start getting a handle on the matter in more detail, buy Brian's new book at Amazon; ebook and paperback is available. For more reading on SJWs, see the Comments. 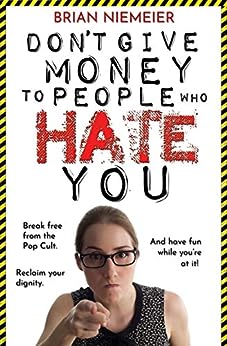