My Life as a Gamer: "Super Robot Wars V" Delivers! 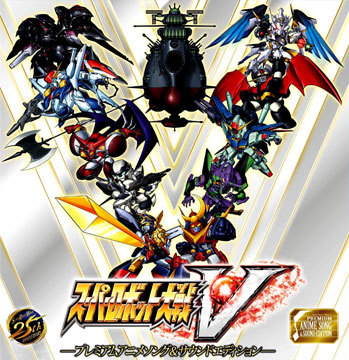 I've been enjoying the hell out of this game series when I'm able to catch Zengar streaming it. Now the first in the series to get a proper release outside of Japan--Super Robot Wars V is out and man has the reaction been a good oneThe shows mashed up in this edition of the series include several that I love, and some that I haven't seen yet, which means that I'm now searching the usual sources for playlists and so on to watch when I'm done watching Zeta Gundam and season two of Iron-Blooded Orphans over at the GundamInfo channel at YouTube.

You might want to knock this game, and the series, as sanctioned fanfic. You're not wrong, but that's okay; none of this has any meaning outside of the games themselves. This is pure fan wish fulfillment, and for gaming that's fine and dandy, but that does not mean that it has to suck balls. It doesn't. It's fun, in that enthusiastic and earnest desire to entertain that characterizes the pulp aesthetic that Japan's best anime and manga inherited from the American pulps.

The game's narrative is full of action, romance, adventure, and comic relief drawn from all of its source material and added to by plausible extrapolations of the interactions by all of the featured characters (and the original ones added to the cast). You will NOT want to skip through the dialog scenes that (a) deliver the character and plot beats, and (b) lead players into or out of the wargame scenarios that comprise the core of this series' gameplay. Nor will you want to skip the animations, drawn from all of the source material, and gleefully ignoring things like how this character breathes in space or why Dragons are a thing as being utterly contrary to known science-- "literary realism" gets wrecked by Mazinger Zero's Ultimate Attack and then obliterated by the Yamato's Wave Motion Gun.

Want a good example? Here's a long (one hour) video that has ALL of the special attacks by ALL of the playable units in the game. Because of its length, you may want to take this in smaller pieces, but if you want to swallow it all in one go then here it is for you below. It's from a channel at YouTube called Duck360Gaming2 Another channel, D180223, has other playthrough videos for this game. If you like that, check out the other videos from other games in the series; this guy's a dedicated fan.

And if you want your own copy, hit up the Playstation store, Amazon, or Play-Asia for a copy. It's for PS4/Vita only at this time, as I don't expect a PC port anytime soon. (Sad, I know.) Guess I know what's on the list for when I get a PS4 or Vita then, don't I? As for the game's sources, hit up that link to TV Tropes; the entry there has all of the source works, and believe me when I say that getting into the source works will be a good time.