Ghost of Tsushima is out now. In case you missed it, it's this:

Yep, a game set during the Mongol invasion of Japan. Gameplay is very reminiscent of the well-regarded Breath of the Wild for the Nintendo Switch blended with the more recent Assassin's Creed games. Yes, playing in Japanese with subtitles is an option, as is playing in Black & White for the Full Kurosawa effect.

This has the Death Cult in games mad, especially when Japanese outlets have been positive about this game. The meme below summarizes aptly. 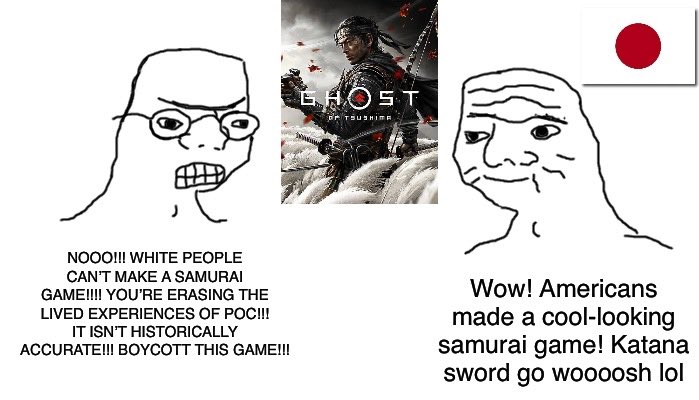 Hero Hei has another take.

Proof that, as yet, gamers care about quality of play over everything else.

Yes, this makes the Death Cult mad. Now the recent attacks by SJWs in companies like Amazon upon Japanese media make sense, as they rightly perceive Japan as a threat to their power, and this Western game--as much a latter-day "Oriental Adventures" take on the traditional adventure fantasy rooted in the struggle of a Fighting Man as anything else--is such a violation of the Cult's dogma that they have to lash out at it and those praising it just to assuage their amygdala.

Why? Because the game doesn't push the poz. That's it. It's not Cult propaganda. The Cult will not tolerate media that isn't their propaganda. They have to wholly own the culture, or no one will.

On that note, my Indiegogo campaign is at 21% as of this post to its goal. I took create culture that isn't Death Cult propaganda, and I'd appreciate your help in getting my newest work across the finish line. You can back it here.