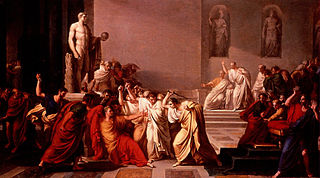 On this day, in 44 B.C., Gaius Julius Caesar died by assassination near the Theater of Pompey. This event is rightly regarded as a key turning point in the transition of Rome from a Republic to an Empire. The linked Infogalactic article is a sufficient summary of the event and its context.

History does not necessarily repeat, but it often rhymes. The assassination of Caesar has become an iconic moment in modern Western history, with many would-be and successful assassinations following that pattern and even invoking that spirit. (In the U.S. context, this is strongly visible with the assassinations of Presidents Lincoln and Kennedy.) When the conditions repeat, so often do the consequent behavior patterns. (See r/K Theory for a very specific take on this.)

The conditions creating the political and economic context of that Roman event are circulating again now across the West and into Russia; the rhetoric, starting in the U.S., increasing open about assassinating figures claimed (as Caesar was) to be power-hungry to the detriment of the people. We're not at the level of having the peers assassinate political enemies by their own hands, yet, but that's where this trend is going.

The thing that some people need to remember is that the West in general, and the U.S. in particular, is already an empire: two or more nations yoked to a common authority. The authority is not really a state, but rather the supranational system of finance that's centralized in the international banking system; this is John Perkins' revelation in Confessions of an Economic Hit-Man, and it is this globalist regime that Trump, Putin, Assad, Le Pen, Wilders, and more seek to destroy. (The European Union is just the most visible part of it, as that imperial proto-state is the model for what the globalist world-state would be.)

The same pattern of imperial greed that led Rome to become an empire is what the globalists are willfully pursuing worldwide, but as it began as a Western project and remains anchored here. Enforcement is based in Washington D.C., laundering in the City of London, and (as is increasingly obvious) dogma out of the defiled Holy See. From there the Round Table networks do their thing, ensuring that the Empire seizes the minds via the culture well before a single shot is fired.

We're seeing again the murmurings that come when someone unexpected arrives to upset expected outcomes of ongoing operations. Caesar's assassination came when he would not take the hint from the Senate (and the interests vested there) to stop fucking with their thing. Andrew Jackson went after the banks, and won, despite vehement and violent resistance from the Establishment. Lincoln's introduction of the Greenback so incensed the banks that they wanted him dead. Kennedy messed with so many interests that it would have been a miracle if he was NOT assassinated.

And since Reagan got shot, we haven't had any serious assassination threats. Several fakes using fuckwits, but nothing that actually got close to being effective. (And no, that dumbass who shot at an empty Oval Office wasn't effective.) Now we're seeing the noises made to signal that it's on the table once more, and like Caesar (or Jackson) the God-Emperor is not afraid.

This is a symbolic Fuck You to the Establishment. Jackson was the Trump of his day, and hated accordingly. Keep an eye on the Fed. https://t.co/2ddDc677OG

See what I mean about history rhyming?

Nothing in politics happens by accident. That's why I saw immediately what the God-Emperor's visit to Jackson's grave meant and who it was aimed at. We talk of "the Deep State", but said group is in thrall to the globalists and they operate out of the world network of independent central banks. That is why I identified the Federal Reserve as the target of the symbolic jab; it's the local boss of the Banking Crime Syndicate that is the real global empire shitting on the rest of the world.

Now to see if the God-Emperor can avoid Caesar's fate.